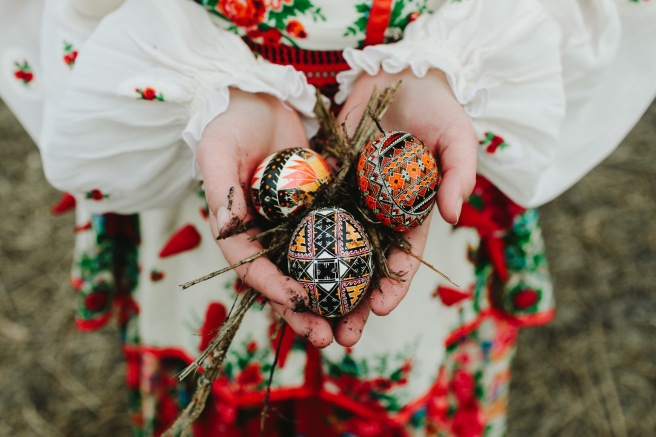 The ways in which we understand our family’s histories and the ways in which we transmit them to others is never a simple matter. But in Canada, where so many of us have never set foot in the countries we identify as our ancestral homelands, tracing our cultural identity across great distances and over generations of separation can be particularly complicated.

Inspired by written and oral accounts of life in Ukraine, both during the Second World War and during the present-day conflict, Blood of Our Soil charts the journey of Hania (Lianna Makuch), a Canadian-Ukrainian woman trying to uncover the ‘secret’ that her баба took to her grave (her баба being her grandmother, also played by Lianna Makuch). Beginning with Баба’s journal chronicling the war, terror, and genocide of the 1930s and ‘40s, and ending with unflinching testimonies of life in modern-day Ukraine, Blood of Our Soil is a finely crafted and often gut-wrenching interrogation of history, cultural identity, and collective trauma.

The play is, as Makuch remarks in the playwright’s notes, “inspired by truth,” and Pyretic Productions’ performance shares these particular truths through an innovative synthesis of traditional and contemporary music, song, dance, and verbal story-telling. Larissa Pohoreski’s masterful musical direction is transportive, employing a variety of traditional instruments including a bandura, dulcimer, violin, and accordion, and ranging from haunting choral melodies to robust folk dances. The geographic and cultural specificity is further brought into focus in this production with the occasional and highly effective intermingling of Ukrainian and Russian with the English dialogue. The multilingualism of the play adds nuance while remaining perfectly accessible to non-Ukrainian and non-Russian speakers.

Interestingly, the first and second acts feel almost like different productions: the highly stylized and largely monologic journey through Баба’s story is abruptly replaced with the multiple, often competing voices of the modern-day Ukrainian and Russian characters. Larissa Pohoreski as the generous sister of a Russian sympathizer, and Oscar Derkx as the young combat veteran Pavlo, both handle their text with seemingly effortless openness and clarity. Derkx’s Pavlo, though deeply troubled by his combat experience, has an unexpected tenderness and honesty, particularly when he is gently reigning in his more rambunctious companion, Misha (Maxwell Lebeuf). Everybody’s favourite drinking buddy, Lebeuf’s Misha has all the warmth, joy, and machismo one might expect from a good-natured soldier, but is perhaps only one drink away from the violence and despair that lurk precariously below the surface. For their endearing camaraderie and well-timed levity, Pavlo and Misha are, for this reviewer, the heartbeat of the second act.

Makuch indicates that many of the characters are drawn from conversations with “the brave and resilient people from present-day Ukraine,” and the production makes great strides to “ensure that their stories are heard half a world away.” But Blood of Our Soil does not shy away from the inherent problems of fully understanding other people’s experiences or telling other people’s stories. Underpinning Hania’s desire to reclaim her family’s lost history and to understand the current conflict in her ancestral homeland, is the growing anxiety that such a task will never be complete. At almost all points of the play, objective truth is mitigated, and the possibility of perfect recollection or communication is thrown into doubt. Character’s stories are told openly and honestly, and hallucinations, dreams, memories, news footage and Facebook posts are given equal status as historical records of individual experience.

Despite the highly specific places and times from which these stories emerge, Blood of Our Soil is a widely relevant and timely exploration of the tensions between the desire to remember one’s family history and the need to forget cultural trauma – and more troubling, the impulse to erase it. The factual history of Ukrainian internment in Canada, the Holodomor, and the very recent events at Meidan are treated with unapologetic directness, and the production as a whole is an uncomfortable reminder of the silences and denials that pervade our current political climate. If the conversations among the audience filing out of the theatre following the play’s premiere is any indication, theatre-goers will undoubtedly leave this production sharing more ideas, stories, and questions than when they entered: this is the work of great theatre.

Blood of Our Soil plays at the Westbury Theatre in Edmonton from now until March 9th. Tickets and info at www.pyreticproductions.ca

One thought on “Blood of Our Soil, Pyretic Productions- Westbury Theatre, Edmonton”